The Difference Between Procedural Law and Substantive Law The substantive law defines the rights and liabilities of the people. Substantive law is a statutory law that deals with the legal relationship between people or the people and the state.

Substantive law refers to how the facts of each case are handled and how to penalize or ascertain damages in each case.

Substantive law consists of written statutory rules passed by the legislature that governs how people behave in society.

In comparison to procedural criminal law, substantive criminal law involves the “substance” of the charges filed against accused persons. Every charge is made up of elements, or the specific acts that amount to the commission of a crime. Substantive law requires that prosecutors prove beyond all reasonable doubt that every element of crime took place as charged for the accused person to be convicted of that crime.

For example, to secure a conviction for a charge of felony-level driving while intoxicated, prosecutors must prove the following substantive elements of the crime:

Other substantive state laws involved in the above example include:

In the United States, substantive law comes from the state legislatures and Common Law, or law based on societal customs and enforced by the courts. Historically, Common Law made up sets of statutes and case laws that governed England and the American colonies before the American Revolution.

During the 20th century, substantive laws changed and grew in number quickly as Congress and the state legislatures moved to unify and modernize many principles of Common Law. For example, since its enactment in 1952, the Uniform Commercial Code (UCC) governing commercial transactions has been fully or partially adopted by all U.S. states to replace the Common Law and differing state laws as the single authoritative source of substantive commercial law.

Procedural laws govern how court proceedings that deal with the enforcement of substantive laws are conducted. Since the primary objective of all court proceedings is to determine the truth according to the best available evidence, procedural laws of evidence govern the admissibility of evidence and the presentation and testimony of witnesses. For example, when judges sustain or overrule objections raised by lawyers, they do so according to procedural laws.

Both procedural and substantive law may be altered over time by Supreme Court rulings and constitutional interpretations.

While each state has adopted its own set of procedural laws, usually called a “Code of Criminal Procedure,” basic procedures followed in most jurisdictions include:

Procedural law is established by each individual jurisdiction. Both the state and federal courts have created their own sets of procedures. Also, county and municipal courts may have specific procedures that must be followed. These procedures typically include how cases are filed with the court, how parties involved are notified, and how official records of court proceedings are handled.

Powers of Substantive vs. Procedural Laws

Substantive law is an independent set of laws that decide the fate of a case. It can actually decide the fate of the under-trial, whether he wins or loses and even the compensation amounts etc. Procedural laws, on the other hand, have no independent existence. Therefore, procedural laws only tell us how the legal process is to be executed, whereas substantive laws have the power to offer a legal solution.

The Difference Between Procedural Law and Substantive Law

To understand the differences between the structure and content of substantive and procedural law, let's use an example. If a person is accused and undergoing a trial, substantive law prescribes the punishment that the under-trial will face if convicted. Substantive law also defines the types of crimes and the severity depending upon factors such as whether the person is a repeat offender, whether it is a hate crime, whether it was self-defence etc. It also defines the responsibilities and rights of the accused. 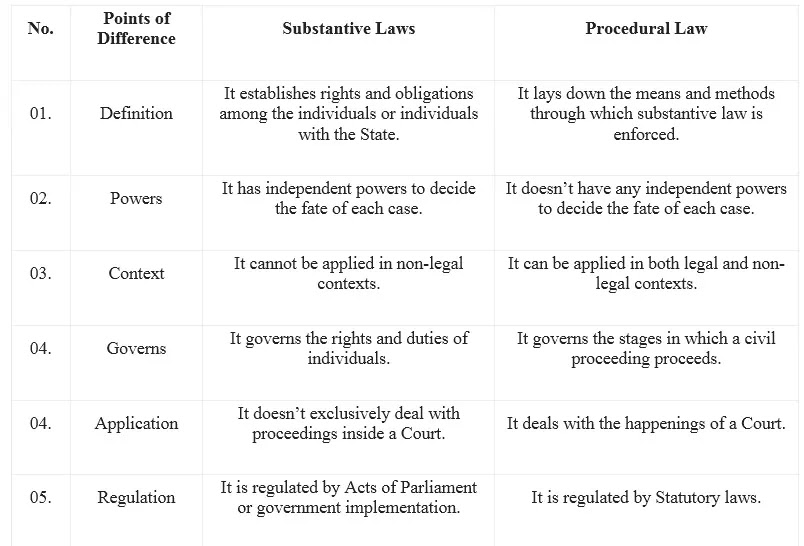 1. Code of Civil Procedure, 1908 (the second part that deals with orders concerning civil proceedings)
2. Code of Criminal Procedure, 1973
3. Law of Evidence, 1872
4. The Limitation Act, 1963
Referred Books:
Akash is a YouTuber by Hobbie and Blogger by Passion. He Loves to spread information that helps others to live in this legal world.